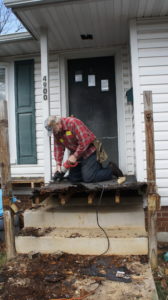 Mr. S proudly served in the US Marine Corps in Vietnam and then spent 40 years working for the Washington Post. His wife was employed by the General Services Administration and they enjoyed being part of their community. But ten years ago Mrs. S became disabled and Mr. S retired to become her full-time care-giver. He built a wheelchair ramp so he could bring her home from rehab and then safely get her out of the house to go to doctor’s appointments. He was grateful that he could bring her home and take care of her so she didn’t have to live in a nursing home but over the years as his health declined he could no longer keep up with home repairs and the ramp had deteriorated and become unsafe. He applied to Rebuilding Together – AFF after learning about our work from a home health aide and a grant from USAA allowed us to rebuild the ramp and make extensive repairs in other areas of the couple’s home.

Twenty-nine volunteers signed on to help with the project. The first team arrived on site on a frosty morning and got right to work demolishing the old ramp. They quickly filled a 20-yard dumpster with the debris and the team leaders developed the plan to construct the new ramp. The ramp came together like clockwork in one day as the volunteers stepped into their roles. They constructed a porch deck so that Mrs. S could roll out the front door onto the ramp. Framework for the 50-foot ramp was built on the solid upright posts that Mr. S had installed 10 years ago. One team focused on cutting planks for the deck of the ramp while others screwed them down. Other volunteers puzzled through the pieces needed to make the turns so the boards on the deck of the ramp fit together as smoothly as possible. Plank by plank, screw by screw, the ramp was completed and as the sun began to set the volunteers took a brief moment to celebrate their amazing accomplishment. Mrs. S. would be able to use the ramp that night in case of an emergency. Mr. S walked up onto the ramp and gratefully said “I could never have done this myself. Thank you!” 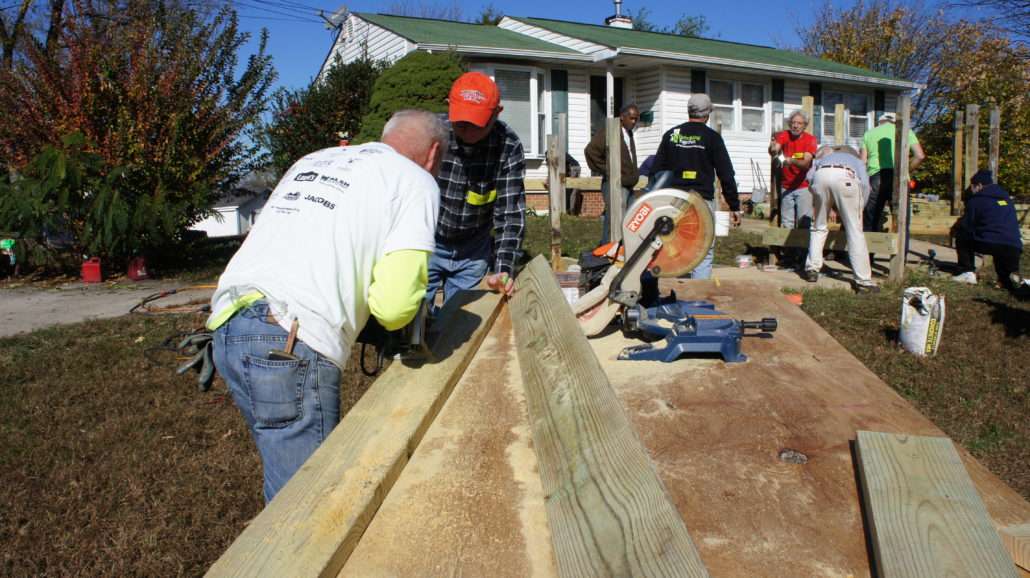 The physically demanding work of demolishing and rebuilding the ramp didn’t stop a core group of volunteers from showing up again on day two – a testament to their commitment to RT-AFF and Mrs. and Mrs. S. Additional volunteers joined the group to complete the railings and add lattice under the raised areas of the ramp.  They also repaired window screens and drywall, painted the foundation, de-cluttered the basement and replaced lights in the kitchen and hallway. In addition, Walsh Electric ran a new circuit for some of Mrs. S’s vital medical equipment which had been running off an extension cord.

The third and final work day brought new challenges. The bathroom floor had deteriorated due to a long-term leak so volunteers had to remove and rebuild the sub floor. Vinyl plank flooring was installed and the team made the bathroom more accessible with a comfort height toilet, grab bars and improved lighting, and finished the repairs with a new vanity and sink.

The USAA grant allowed RT-AFF and our team of volunteers to make extensive repairs.  Twelve critical health and safety priorities were addressed to improve accessibility, electrical safety, fall safety and water leaks allowing Mr. and Mrs. S to continue living safely in their home of 30 years.

Check out our Flickr album to see the old ramp come down and the new ramp being constructed.