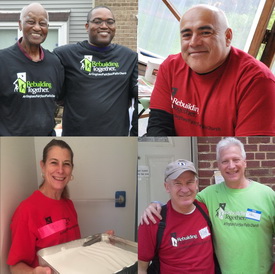 “Rebuilding Together – AFF was formed and has benefited greatly from Barney, Beverly, Al and Paul’s expertise and collegial generosity. Our staff, board and our many partners feel privileged to have worked with these board members and are enormously grateful to them for their many contributions,” said Patti Klein, RT-AFF Executive Director. 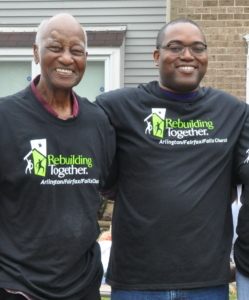 Barney began volunteering with the organization when it was a program of another nonprofit. Barney served as the unofficial Parliamentarian to the board and his quiet and thoughtful leadership style along with his extensive experience working on other boards of directors helped the board grow and shine. Barney was a National Rebuilding Day Team Leader for Psi Alpha Alpha Chapter Omega Psi Phi Fraternity for 35 years. “The Psi Alpha Alpha team worked on a lot of houses,” reflected Barney, “and I’m really proud that we have worked where people really need help – along the Route 1 corridor in Fairfax County.” He continued by saying “Our board worked very well together, from the first day we discussed becoming an independent nonprofit. This was the key to RT-AFF’s growth and success.” 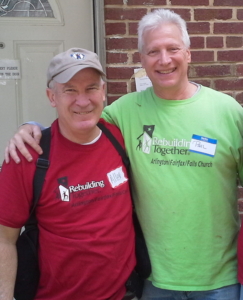 Paul (r) was instrumental in creating the legal framework to establish Rebuilding Together Arlington/Fairfax/Falls Church, Inc. Bruce Jolly, another founding RT-AFF board member, brought Paul on board. They were once law partners and Bruce knew that the team needed someone with Paul’s skills and acumen. “From September 2010 through January 2011 I worked with Bruce and Patti to form the new entity, develop by-laws, apply for tax exempt status and recruit the Board of Directors,” recalled Paul. “We received our 501(c)3 status in six weeks – we were astonished it happened so quickly!” Paul served as RT-AFF’s Corporate Secretary for 11 years and modestly said “It was really cool to create an organization from scratch.” 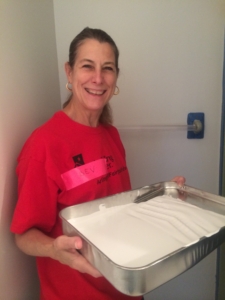 Beverly joined the board just as the new Rebuilding Together – AFF was getting off the ground. “The foundation had been laid, including all the legal work, but the construction still had a long way to go,” recounted Beverly. “Being part of the team that worked on building RT-AFF was especially rewarding because we knew that having a well-functioning board was necessary to assure that RT-AFF could fulfill its mission and expand the services provided.” Beverly served as Board Secretary, Chair of the Governance Committee, and  as an NRD Team Leader for a group of real estate agents from Keller Williams McLean. Beverly also spent many NRD’s as an RT-AFF ambassador, visiting teams at work, spreading cheer, taking photographs for our marketing efforts and getting to know the homeowners the teams were assisting. 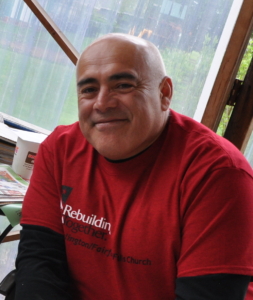 Al joined the RT-AFF board in 2014 and in addition to being an all-around engaged board member, including as Vice Chair of the board, Al was a key member of RT-AFF’s leadership team for the NeighborWorks America Excellence in Governance (EIG) program. During the 18-months of the EIG process, Al’s service on numerous other boards brought an important perspective to the leadership team’s discussions about how the board could take its work to the next level. “Al’s insights helped us to better organize ourselves and focus our efforts in a way that has since allowed us to better support the critical work that RT-AFF carries out in our communities every day,” said Andrew Dumont, RT-AFF Chair. “We will miss Al’s quick wit and sharp intellect but know the organization will forever benefit from the many ways he invested his time and passion into RT-AFF over the years.”

Al also brought on M&T Bank as a sponsor and team for National Rebuilding Day. Al and the M&T team have enjoyed supporting our programs by working on numerous non-profit residential facilities and one home as part of their commitment to our community.

Thank you Barney, Beverly, Al and Paul for your service to Rebuilding Together – AFF.