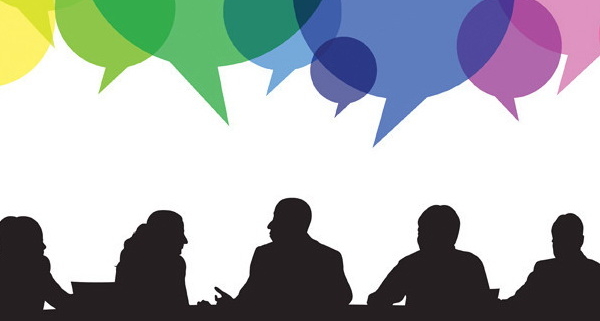 Three dedicated board members retired from the RT-AFF board in January, and we’d like to recognize their outstanding service. “Bruce, Jean and Julie exemplify the meaning of volunteerism. They are each passionate about people, giving of their time and want to make real differences in our community,” said Patti Klein, RT-AFF Executive Director. “We truly appreciate all they have done during their tenures with RT-AFF.”

Bruce Jolly began his volunteer service with RT-AFF in 1989 as a member of the St. Peter’s Episcopal, Arlington National Rebuilding Day team and was the first person to volunteer to help us become an independent nonprofit organization when we began the process in 2010. Bruce served as Vice Chair of the board for several years and provided ongoing legal advice and support. Bruce, along with his co-captains at St. Peter’s, led National Rebuilding Day teams that made repairs and modifications to 33 homes and nonprofits, primarily in Arlington. “I’ve enjoyed serving on the board of RT-AFF and helping homeowners,” said Bruce. “I’ve received a lot in return – mainly the joy of working together with friends and colleagues to get a job done and to make our community a better place.” 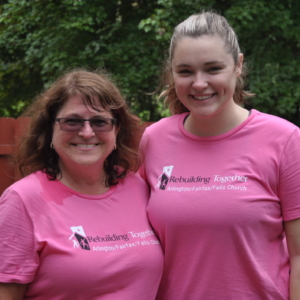 Jean Edwards first came to RT-AFF to do a team project with a group from EMC, now part of Dell Technologies. She led her team on many projects including working on several homes and two USO facilities. Jean captained our first “She-Build” project with a team from Dell Technologies’ Women in Action DC/MD/VA Chapter in October 2021. Jean served as Secretary of our board, Chair of the Development Committee, and was an integral member of our Excellence in Governance team. “The Excellence in Governance program allowed me to grow as a leader and expand my skills to improve the RT-AFF Board,” said Jean. “My service to RT-AFF was all about giving to others and I appreciated the opportunity to make this valuable gift and to expand kindness and hope to our community.” 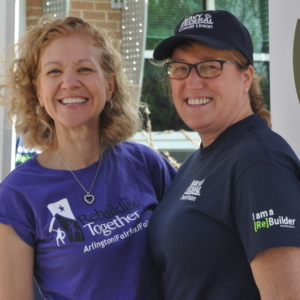 Julie Hill was the first Chair of the RT-AFF board and led us through a successful transition from a program of another organization to becoming an independent nonprofit that was formally established in 2011. Julie began volunteering as a team member with Navy Federal Credit Union in 1991 and quickly saw the opportunity to take on a more significant role as a team leader. Over 23 years she led 1,350 volunteers to work on 25 homes, nonprofit group homes, schools and a USO. Julie received a 2019 Fairfax County Volunteer Service Award for her work with RT-AFF and in our community. Under Julie’s leadership the RT-AFF board completed an 18-month Excellence in Governance program and developed a strategic plan to shape the course of our organization. Julie’s passion to help reaches beyond our local community. In times of crisis, she volunteered with other RT affiliates to rebuild homes in Louisiana after Hurricane Katrina and in New York City after Hurricane Sandy.

We offer our sincere thanks to Julie, Jean and Bruce for all they have done to help make RT-AFF a resilient and strong organization, and for their commitment to safe homes and communities for everyone.